Three Life Lessons I Learned From Producing a Music Showcase

On March 15, I hosted Girls to the Front Day Party during SXSW, with my friend and co-producer Emily Treadgold, founder and editor in chief of The New Nine.

I always wanted to put together a show of my own, but it never felt like there was a right time or reason. But with SXSW upon us, once again the idea of producing a show was in the back of my head, itching to be heard.

Despite self-doubt and lack of experience, I convinced Emily to co-produce a show with me. We told ourselves, “We are badass ladies and we can do this!”

So we made it happen.

It was not easy work by any means. There were many meetings, emails, cold brew coffees consumed (much thanks to Brew & Brew and their reliable Wi-Fi), anxiety-filled dreams, and even a trip to Party City and Home Depot.

Essentially, we had 21 days to find a sound engineer, a bartender, a stage manager, sponsors (we needed drinks, right?!), backline (who knew artists don’t travel with all of their gear), AND we had to track down six DI boxes two days before the show (which included me calling every music rental place in town during the largest, busiest, craziest, music event of the year).

Yet 21 days later, on March 15, we had a complete event with amazing performances from Alice Phoebe Lou, Violet Days, Pearl Charles, Pronoun and Kitten. We also had great refreshments from Meridian Hive Mead, Dripping Springs Vodka and Gin, Busy Bee Yerba Mate, and Waterloo Sparkling Water, and not to mention we had a wonderful venue, much thanks to the Musx team.

We did that! We had performers. We had drinks sponsors. We had a great venue. AND there were ACTUALLY people that showed up to enjoy it all.

What did I learn from all of this?

1. The only person stopping you, is you. 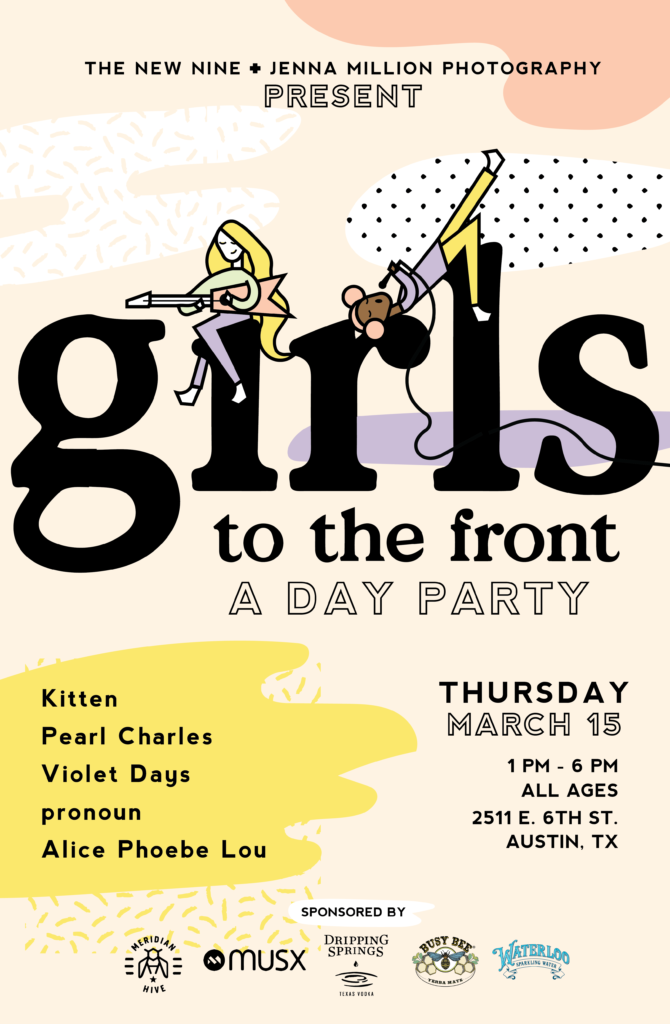 Girls to the Front Day Party poster by Jesus Acosta.

You probably hear this all the time. Too often we allow the little voice in our head whispering fear and doubt to take over our lives, and we don’t have a new, awesome experience because we’re scared of embarrassing ourselves or failing. So what?

What’s the worst thing that could happen? No one is going to show up to my show. So? I’ve still built an awesome show with my friend, and now I know how I can improve next time.

What’s the best thing that could happen? A million people show up, and it’s the hit event of the century, and it rockets my career! That’s probably not going to happen either. But you don’t know until you try.

2. You have to believe it before you see it.

No one has the same drive or the vision as you to turn your idea into reality. You have to be your biggest cheerleader, believer, and preacher. Think about it, talk about it, BELIEVE IT as if it’s real and it’s already happening.

This is something I struggle with a lot. I don’t like to be the person to ask favors or to inconvenience someone or to take up their time. But I found that this is just another fear that the little voice is whispering in your head. More often than not, people really want to help you.

While producing this showcase, Emily and I had to ask for an INCREDIBLE amount of help, advice, support, time and resources from people. As much experience as I have in the event production world, I still didn’t know a thing about backline or sponsorship or sound engineering. But Emily and I both know people who do know a lot about those things, so we asked for help.

The thing is ­– if people see you are doing something really cool, they want to be a part of it. If they know you and know you’re reliable and hardworking, they want to help you. Why? Because you build others up, as you build yourself up. Others want to see you succeed, because they know in the future that you can help them succeed too.

What started as an idea to produce a showcase turned into this: 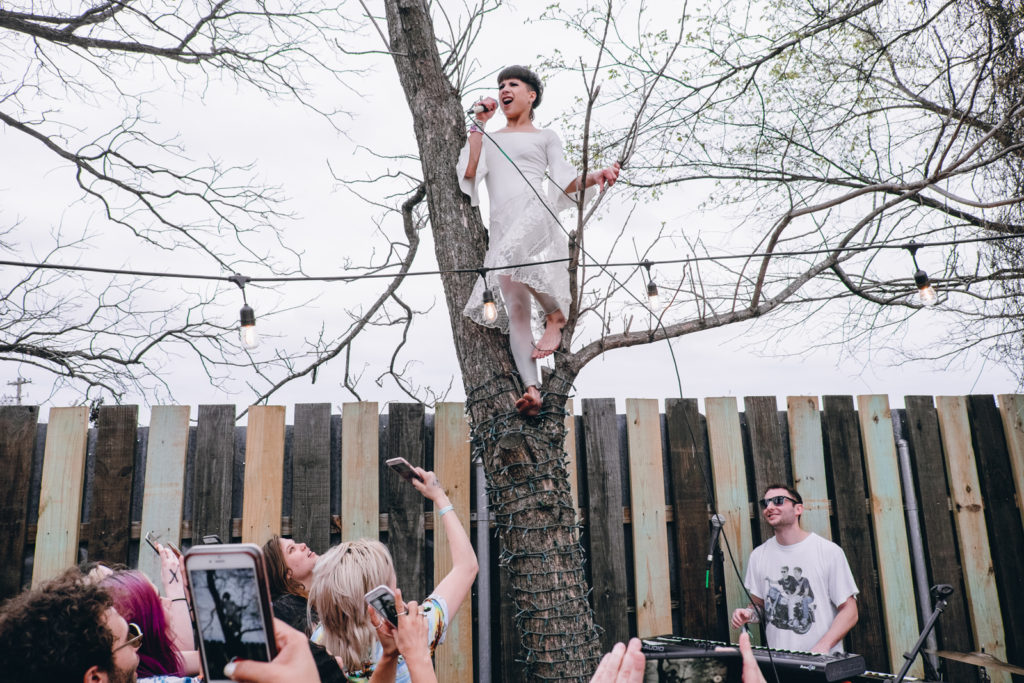 Singer Chloe Chaidez of Kitten sings to crowd from a tree at Girls to the Front Day Party. Photo by Jenna Million.